For those of you who read my write-up (Buy Carrier Global As Potential Asset Sales Will Reduce Debt (NYSE:CARR)) on Carrier Global (CARR), I started the write-up with a very simple statement: Labels matter. Labels matter for Carrier Global as it is a Global HVAC company with exposure to Fire & Security and some compared Carrier Global to traditional HVAC companies; however, its true peer is Johnson Controls (JCI). The same statement, i.e. labels matter, applies to Hanesbrands Inc. (HBI) as well. You may think of Hanesbrands as an “underwear” company, but there is a hidden asset underneath the surface; that asset is Champion. Champion is the “crown jewel” of Hanesbrands as it not only is growing rapidly, but also generates operating profit margins higher than Hanesbrands’ overall operating profit margins. Moreover, there is a catalyst, a turnaround was underway in its innerwear segment prior to Corona. Buy Hanesbrands for the growth in Champion and the turnaround that’s emerging in its innerwear division.

I may be dating myself, but who doesn’t remember the Hanesbrands commercials with Michael Jordan as their spokesperson (Hanes michael jordan commercial) and (Hanes – Tagless (Michael Jordan commercial)). Back in the day, they introduced the term “bacon neck” and new product innovations such as “tag-less” underwear and t-shirts. A lot has changed since then and, a lot has changed within Hanesbrands when they were spun out of the former Sara Lee in September 2006. Through both inorganic and organic growth, Hanesbrands is a global player in the “innerwear” and “active wear” markets generating 36% of their revenue outside of the United States.

After adjusting for the discontinuation of C9 and DKNY, Hanesbrands is trading at 1.1X Revenue and 7.3X EBITDA and appears to be relatively inexpensive compared to the market especially considering its high Pre-tax ROIC. 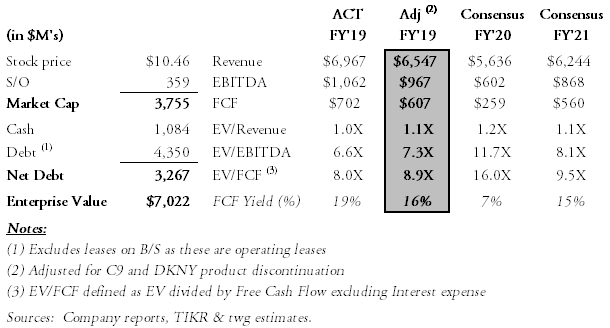 Investors should BUY Hanesbrands since:

While there have been other write-ups highlighting that Hanesbrands is cheap and is a value stock, there are stocks that look to be cheap, but are value traps and I’ve written about them on Seeking Alpha such as DXC Technology (DXC) (DXC Technology: Statistically Cheap, But A Value Trap (NYSE:DXC)) and Garrett Motion (GTX) (Garrett Motion – A Value Investors’ Nightmare (NYSE:GTX)). Hanesbrands is a classic value stock as it is inexpensive and when one digs beneath the surface, a hidden asset reveals itself, Champion. Prior to the Corona virus enveloping the world in 2020, Champion (excluding the Target-exclusive C9 brand) grew revenue by ~$500M or 40% YoY.

Champion is the driver of Hanesbrands growth and profitability within Hanesbrands. as other large segments such as Innerwear are declining at a rate of 3% per year. While Champion’s Adjusted Operating Margin (%) is estimated and should be considered directionally correct, management has provided commentary regarding Champion’s profit margins and, also, Management’s disclosure of “rebasing” the financials to exclude the Target-exclusive C9 brand and DKNY Intimates from YoY comparisons in 2020. Based upon the disclosures from Management and commentary (below), I conservatively estimate that Champion earns 20% Adjusted Operating Margin (%) for Hannesbrands.

Champion is going to grow nicely again, and we’re seeing strong margin improvement that will more than offset the decline we’ve projected in C9.

Champion profitability improvement, as you mentioned, has continued and Activewear remixing. All of those are quite favorable to gross and will continue to be in the fourth quarter. 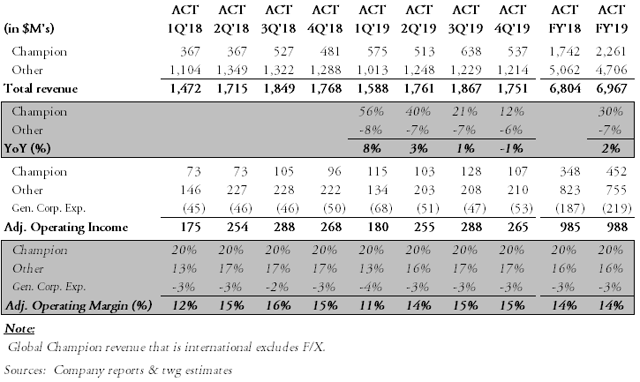 A Turnaround In Innerwear is Emerging

Hanesbrands is priced inexpensively, but over the past 4 years, while revenue grew over $1B, the company’s adjusted EBITA only grew less than $40M. From the tables above, the Champion product line is driving the top line revenue growth and is offsetting the revenue declines in innerwear. Unfortunately, the top line growth of the company is not driving profit growth since Innerwear is declining at a rate of 3% per year and this line of business generates adjusted operating profit margin (%) in excess of 20%. In other words, the revenue declines in Innerwear are largely the driver for the company’s profit stagnation.

Prior to the shelter in place orders that occurred in the United States, Hannesbrand’s Innerwear revenue was “turning around” driven by new product innovations and YoY revenue performance improved by over 200 bps YoY.

Through mid-March US Innerwear revenue was down less than 1% over prior year, well ahead of our initial forecast as our turnaround initiatives were gaining momentum. During this period, point of sale at our Top 7 customers which is where we focused our new innovations or revitalization efforts increased 3% in both basics and intimates. And our market share improved meaningfully in basics bras and shapewear. 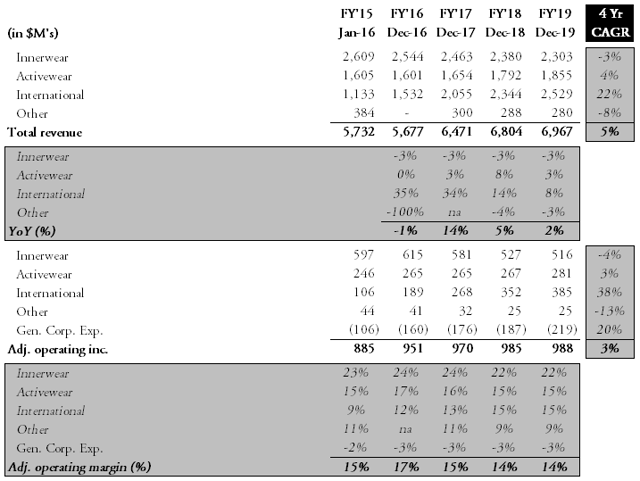 There are a handful of publicly traded companies that make Activewear and Innerwear and I believe that HanesBrands closest comps are VF Corp (VFC), Gildan Activewear (GIL) and PVH Corp. (PVH) which is also known as the Phillips Van Heusen company. In light of the turnaround occurring in Innerwear and, also, the fact that the market is not giving HanesBrands credit for the growth and profitability for Champion, I expect Hanesbrands to trade closer to 2X revenue or 13X EBITDA or up to $27 per share based upon those multiples. It should be appreciated that at $27 / share, HanesBrands would have a FCF Yield of 6% based upon its FY’19 financial adjusted for C9 and DKNY

There are many stocks that are cheap and many are cheap for a reason. In order to “unlock value” there needs to be a “hidden asset” and/or a “catalyst”. In the case of HanesBrands, there is both a “hidden asset” and a “catalyst”. Investors should buy HanesBrands as their Champion line of business is growing in excess of 30% excluding C9 and the catalyst for shares is the turnaround that is occurring in its Innerwear division.

Disclosure: I/we have no positions in any stocks mentioned, and no plans to initiate any positions within the next 72 hours. I wrote this article myself, and it expresses my own opinions. I am not receiving compensation for it (other than from Seeking Alpha). I have no business relationship with any company whose stock is mentioned in this article.

Charter Communications’ EBITDA Margin Should Continue To Expand In 2020 (NASDAQ:CHTR)