In today’s market, it is easy to overlook a stock like ADMA Biologics (ADMA), which has barely moved even as the market has continued to shoot up. However, despite its boring appearance, ADMA actually has a really compelling “high probability” bull case that should play out over the next 1-2 years and provide substantial alpha to investors. If you’re a patient investor, it isn’t a bad idea to pick up some shares now and wait for the thesis to play out. 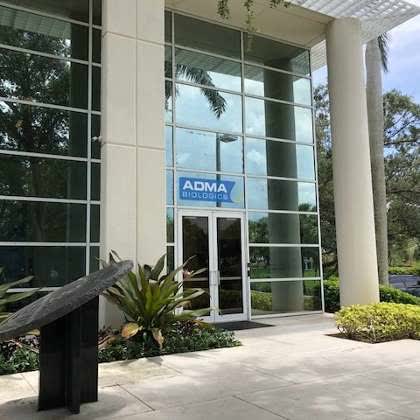 ADMA mainly collects and processes plasma into higher-value products. Plasma is a yellowish liquid that makes up around 55% of a body’s total blood volume. While it is mainly composed of water, it also contains important compounds like immunoglobulins that can be used to create a variety of therapeutic products.

ADMA has 3 FDA approved plasma-derived products. BIVIGAM and Asceniv, both approved in 2019, are intravenous immunoglobulin products used to combat primary immunodeficiency. Nabi HB is a much older product that is used to treat Hepatitis B.

Historically, the US immunoglobulin, or IG, market has seen slow and steady high single-digit/low double-digit growth over the past few years and is expected to keep up the growth over the next few years, growing from $6.8bil in 2018 to $13.9bil in 2019. 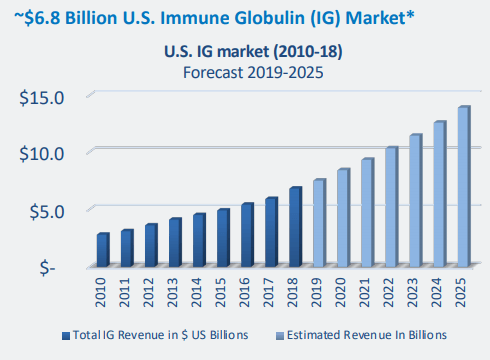 It is a very concentrated market due to the regulatory high barriers to entry. Currently, there are just 6 companies approved to produce IGs, with CSL and Grifols (NASDAQ:GRFS) holding the largest chunk of share. Usually, it takes 7-12 months between producing and releasing a batch of IG products. 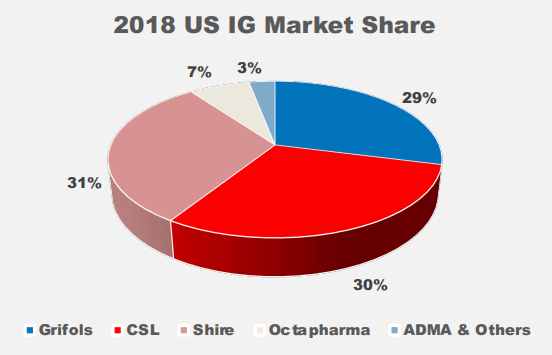 Due to the short shelf life and high barriers to entry to the IG market, it can be hard for companies to respond to market changes. Since the middle of last year, there has been a pretty severe shortage of IG in the market, which has forced physicians to reduce doses and, in some cases, turn around patients. We believe the high barriers to entry, along with the shortage, make the IG market a very attractive market to operate in for ADMA, with limited competition and substantial demand for the product.

ADMA is in the midst of a massive production ramp for its Boca Raton Facility, which can process 400k liters of plasma per year. With each L yielding 3.5-4g of finish IG products, this indicates a total production potential of 1.4-1.6mil g of finished IG per year, indicating a $250mil revenue opportunity for ADMA, 7x its current LTM revenues of around $36mil.

Currently, ADMA only operates 1 plasma collection center, which usually generates 30-50k L of source plasma annually. Since ADMA’s Boca Raton plant can process 400k L in plasma annually, this indicates that the current capacity for the plant is likely just 10%.

At the moment, ADMA is in the process of ramping up sales and building plasma collection facilities to increase low-cost supply. It has plans to build 5-10 collection centers over the next 3-5 years. Quarterly sales have recently hit $10mil, but there is still room to grow.

By ramping production over the next 3-5 years for its main facility, management believes the company will be able to achieve substantial economies of scale by leveraging fixed operating costs related to the operations of its facility, which should increase margins and raise profitability. ADMA believes that the currently supply-constrained market should be able to absorb any inventory it produces from the facility. 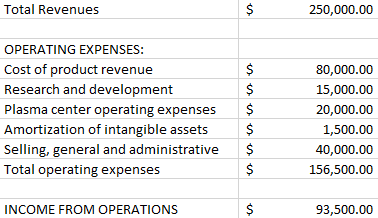 Our estimates show that ADMA could generate 40% operating margins and nearly $100mil in operating income per year when it hits peak sales, which would obviously lead to a much higher valuation compared to the current market cap of around $250mil.

The reason why we like this investment case so much is because of how certain it is. Immunoglobulins are in high demand right now and should remain in high demand in the future due to the fact patients have to regularly refill their treatment for it to remain effective, and due to the fact that most patients need a specific immunoglobulin (each immunoglobulin can only bind to a certain set of pathogens). Therefore, the market should be able to easily absorb any additional supply from ADMA. The only thing ADMA needs to do is to ramp up the collection of plasma by building additional plasma centers, and it already has the capital to do so.

In early May, ADMA mentioned that it had submitted 3 BIVIGAM conformance batches successfully to the FDA. Note that a conformance batch is used to test the consistency of a production process. Interestingly, these 3 conformance batches could be produced at twice the scale compared to the initial process, meaning that ADMA could produce twice the initial peak amount of BIVIGAM using this new process. In my opinion, this is great for ADMA, potentially allowing the company to ramp up production much more quickly without additional investment, which should substantially reduce time to profitability.

ADMA had to incur costs of $3.9mil to produce the conformance batches of BIVIGAM, leading to a higher than anticipated net loss, but this is one time and after expensing this ADMA should be able to sell the batches for 100% margin.

Excluding these one-time costs, you can actually see the operating leverage of the business very clearly in the graph below, with revenues increasing substantially while COGS only saw a small increase. If this trend continues, ADMA’s gross margin should increase substantially over the next few quarters as revenues continue to ramp. 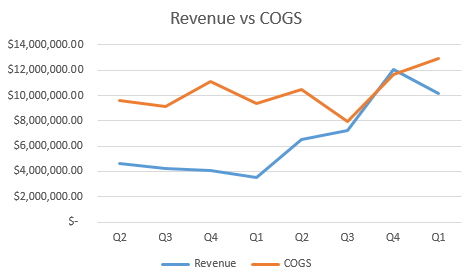 At the end of the first quarter, ADMA had $100mil in cash and around the same amount of debt in the form of notes on its balance sheet. This was after it had completed a capital raise in February to sell 23.5mil(w/ 3.5mil underwriter option) shares at $3.50 per share, raising $88.5mil in total. Management believes there should be enough cash to fund operations up to 2021. There is a good chance that the company would need to do another capital raise but we believe that as long as execution is good, the raise shouldn’t be too dilutive to shareholders.

If ADMA can really ramp up sales and production of its IG products over the next few years like management claims, then it’s current valuation will look cheap. CSL, one of the largest plasma collection and processing companies in the world, has 20% net profit margins and trades at a 65x PE multiple. If ADMA even manages to get a portion of a $100mil in operating income we believe is possible, the valuation of the company should increase substantially. 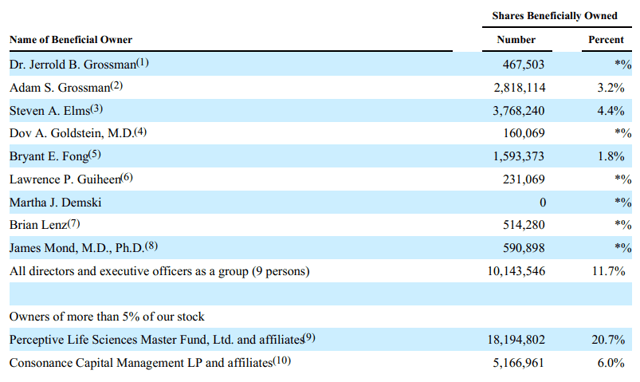 The main risk is execution. Management has to ramp up sales and production substantially while dealing with a very limited cash position. If management doesn’t hit its targets on time, it could be forced to raise capital at lower prices, which could be quite dilutive.

Disclosure: I am/we are long ADMA. I wrote this article myself, and it expresses my own opinions. I am not receiving compensation for it (other than from Seeking Alpha). I have no business relationship with any company whose stock is mentioned in this article.

Ipiranga Should Give Ultrapar The Fuel It Needs (NYSE:UGP)

Vanguard Extended Duration Treasury ETF: Expect It To Remain Rangebound In The Next Year (NYSEARCA:EDV)